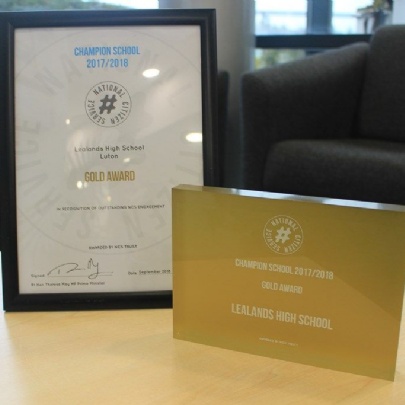 We are incredibly proud to have been awarded as an NCS (National Citizenship Service) Champion School for 2017/18 at gold level. Lealands was selected for this award due to the positive number of students who enrolled on the programme last academic year.

The scheme involved the students attending two residentials. In the first week, the students went camping and took part in team building and outdoor activities such as kayaking, abseiling etc. The second week was at a university, where they were involved in careers based activities. The last two weeks was a community project. Our students chose a charity and organised events to either raise money or provide a service; such as a creche or visiting the elderly.

The NCS programme has proved to be a fantastic opportunity for our students to engage in something positive for four weeks over the summer; learning skills, preparing for the future and giving back to the community.

Pastoral Support Manager, Miss Naureen, attended the NCS Champion School event last night, where she was presented with our award and certificate, signed by Prime Minister, The Rt Hon Theresa May MP.